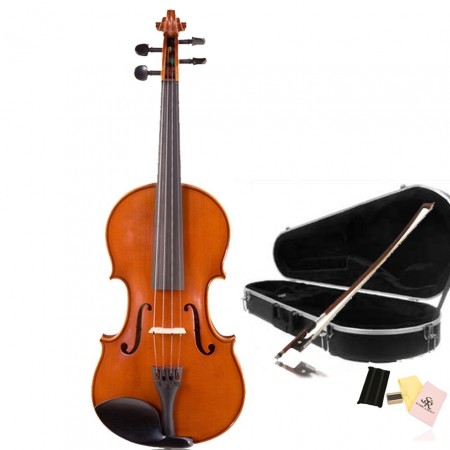 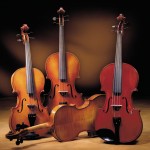 Great start for your violin career!

This brand of violins is from American company Conn-Selmer, and this particular model is great fro beginners who wish a great quality instrument to get started!

Heinrich Roth was a seventh-generation violin maker who worked with his father, Ernst Heinrich Roth, and his brother, Albert, in the family shop in Markneukirchen, Germany. During the early 20th century, the family had built a reputation for making fine string instruments and sold many to visiting Americans. In 1922, Heinrich was persuaded by his American customers and friends to come to the United States, bringing the experience and reputation of Roth instruments with him.

After a few brief jobs in violin departments of other companies, Roth’s expertise led him to manage the Simson & Frey violin department, where his reputation grew throughout the United States and abroad. In 1932, upon the retirement of Herman Simsom, Roth teamed with Max Scherl to buy the Simson & Frey firm. They renamed it Scherl & Roth. In 1938, the company moved from New York to Cleveland, Ohio, an early hub of violin manufacturing in the U.S.

After World War II, interest in string instruments bloomed as educators recognized the importance of developing school orchestras. Aiming to provide students with the finest instruments possible, Roth brought young, skilled violin makers from Europe to his Cleveland violin shop. Under Roth’s guidance, these craftsmen established the finishing and adjusting techniques and standards to provide fine, affordable school instruments in large quantities. Those standards later became the basis for those adopted by Music Educator’s National Conference (MENC). Soon Scherl & Roth became one of the largest string shops in the world as well as the nation’s largest supplier of string instruments and accessories. The entire Scherl & Roth line became recognized as the preferred choice of many leading string educators.