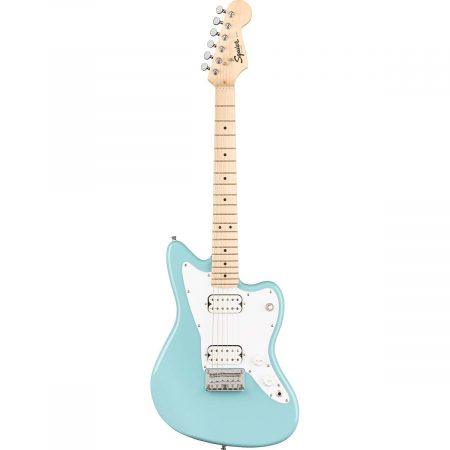 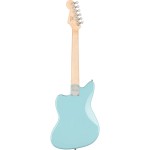 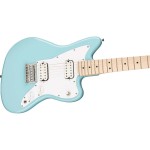 Start your young player off in style with the uber-cool Mini Jazzmaster HH electric guitar from Squier. This 3/4-size axe is lightweight, easy to play, and has a full-sized sound. The Mini Jazzmaster’s HH configuration uses two standard humbucking pickups to churn out larger-than-life rock ‘n’ roll attitude. Additionally, its simple three-way toggle switch, single volume knob, and single tone knob layout offer a great way for beginning six-string slingers to explore different tones. When introducing their kiddos to the world of guitar playing, parents at Sweetwater love the Squier Mini Jazzmaster HH, a perfect guitar for your aspiring musician.

The diminutive Mini Jazzmaster HH body is roughly 3/4 of the size of its older brother. Its short 22.75-inch scale length makes long-stretches and bar chords far easier for young players, and the slim “C” profile maple neck sits comfortably in smaller hands. The Mini Jazzmaster HH also makes an excellent travel companion for older players who can’t stand to be away from their guitars for too long, since it can be easily stowed in overhead airplane compartments.

Stocked with two Squier standard humbucking pickups, the Mini Jazzmaster HH has a full-bodied sound with plenty of grit, perfect for rocking out. Unlike the full-sized Jazzmaster and its notoriously complex electronics, the Mini Jazzmaster HH is a streamlined affair. A three-way toggle switch lets you switch between or blend the bridge and neck pickup, for plenty of tonal variation. Close your eyes, and you won’t believe such a massive sound is coming from a guitar of this size!

Since the 1990s, offset guitars, like the Jazzmaster, have become icons of indie music. With their cool look and distinctive sounds, they’re a great alternative to some of the more common guitars. If your young musician is more into Tame Impala than the Rolling Stones, the Mini Jazzmaster HH is an ideal choice. Along with its standout looks and stellar tone, it comes equipped with a great hardware package, including a synthetic bone nut, die-cast sealed machine heads, and a hardtail bridge, so your little one can slam away without constantly falling out of tune.